TAM Student, Jonathan Buechner—TAM Class of 2019—went to hear Jean-Claude Juncker speak in DC recently. We asked Jonathan to provide some reflections on the event. 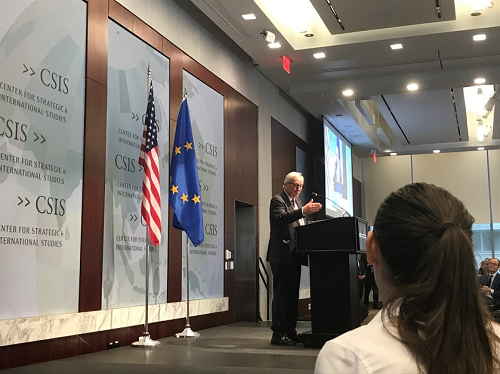 On July 25 I had the opportunity to go listen to European Commission President Jean-Claude Juncker speak at the Center for Strategic and International Studies (CSIS). This keynote address followed his meeting with President Trump earlier in the day which received a lot of press attention. His speech was supposed to start at 4pm but the White House decided to hold a last minute joint press statement following their meeting which was live streamed at CSIS. The good news was that the trade war between the EU and US was averted, for now, with both presidents saying they will begin negotiations. In the meantime, there will be no tariffs on industrial goods and there will be cooperation on liquified natural gas and soybeans coming from the US.

The main emphasis of President Juncker’s speech was the importance of the transatlantic alliance. He told the packed room that Europe’s shared history with the US matters and that young people must learn about the power of the past in order to solve today’s problems. He stressed that the US has always been a strong supporter of European integration. Following the Marshall Plan, as he explained, the transatlantic alliance has served as the “anchor of global stability,” something which it should continue to uphold in the future. President Juncker also stressed that the economic relationship between the EU and the US is the largest and most important in the world and that trade wars have no winners which is why Europe was prepared to cooperate on issues of common concern with “like minded partners to create new opportunities and improve the global system itself.”

Overall, it was really cool to see him in person, directly after meeting with Trump. The mood was optimistic, and the full house highlighted the importance of EU-US relations and why we need people who understand the transatlantic alliance (like TAM students)!