We are looking forward to meeting with TAM overseas partner site representatives in London on Friday, June 14th. That evening we will gather with TAM alumni, students, administrators, faculty, and friends to celebrate 20 years of TAM! A panel discussion called “VIEWS on TAM at TWENTY: The US-EU Relationship” will begin at 6pm. We have invited the following individuals to provide remarks:

Featured Speakers: Two long-standing members of the TAM community, Professors Paul Corner (University of Siena) and Gert-Joachim Glaessner (Humboldt University of Berlin) will say a few words at the start of this panel discussion.

Featured Panelists:
Brian Beach: TAM Class of 2005
Brian works as a Senior Research Fellow at the International Longevity Centre UK (ILC) in London, using evidence to inform policymaking in the context of longevity and demographic change. He completed the TAM Program at UNC Chapel Hill and in Siena, Italy. Through the program, he gained extensive knowledge on European Union institutions, the process of European integration, and European welfare states. After TAM, Brian worked for three years in the Office of International Affairs at AARP in Washington, DC. There, he helped organize a number of international dialogues and conferences in North America, Europe, and Asia to address the opportunities and challenges of global ageing. After his time in DC, Brian undertook his doctoral work at Oxford University with the Oxford Institute of Population Ageing before joining ILC.
Claudia Matthes: Humboldt University of Berlin
Claudia has served as the Academic Director of the TAM, EuroMasters, German Turkish Masters Program in Social Sciences (GeT MA) and additional international MA Programs at Humboldt University of Berlin since 2009. She is also a Senior Lecturer and Researcher in Humboldt University’s Department of Social Sciences, with research interests including German and comparative politics, political governance; transition and democratic theory; and regional cooperation and EU-enlargement. Dr. Matthes previously held positions in the Administration of the Deutsche Bundestag and the Office of the Vice-President for International and Public Affairs of Humboldt University of Berlin.

Claire Mock-Muñoz de Luna: TAM Class of 2000
Since completing TAM in 2000, Claire has worked in London, Oslo and Copenhagen, in a number of sectors, including over 12 years in the NGO-, government think-tank-, and university sectors. Her professional path has led her into the field of migration and health, focusing primarily on the reception and care for newly arrived refugee children, from health care and education system perspectives, as well as cultural competence capacity building. She is to defend her PhD in Autumn 2019 at the University of Copenhagen’s School of Public Health. Her PhD research explores migrant education policies in Denmark, Norway and Sweden, and the role of education in addressing migration-related childhood health inequalities. As a TAM student, she studied in Chapel Hill, Madrid and Bath where she also earned her degree.

Urban is the Director of Studies at the Centre for European Studies and Associate Professor of Political Science at the University of Gothenburg in Sweden. He is the Director of the TAM double-degree partnership there. In addition, he runs a hybrid organization, iythinktank.com, which is a think tank and a youth conference with the aim at standing up for the values of an open society. 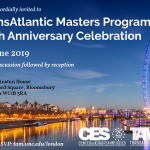