“My experience as an Early Elections Official in Wake County”

We are so proud of the ways that our alumni contribute to their communities around the globe. Please read Breanna Kerr’s account below. She is a recent TAM graduate who studied overseas in Berlin. More recently, she worked as an elections official in Wake County, NC. Her narrative inspires us all! Thank you for sharing this story with us. 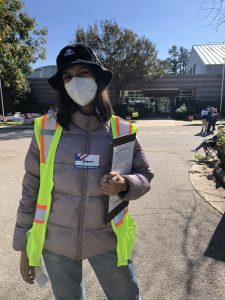 In the wake of the murder of George Floyd, it became clear that the United States had reached a breaking point. I did what I have done my entire adult life when faced time and time again with the reality of rampant racism and police brutality: I posted on social media calling for awareness, read revolutionary texts, and discussed with my friends where we go from here. I went to protest in downtown Raleigh and helped clean up the following morning, but none of this felt like enough. In the context of greater divisions and disparities in the U.S., thrown into sharp relief by the ongoing COVID-19 pandemic, we reached a point of no return — either take action now or be complicit, positioning oneself firmly on the wrong side of history. How could one person in one small corner of the country take on the disenfranchisement that has targeted the Black community for centuries?

When I saw a Wake County Board of Elections advertisement calling for poll workers, I applied immediately. I have always been passionate about grassroots-level democratic participation, having studied and written about democratization and transition theory extensively for my M.A. thesis in the TransAtlantic Masters Program. I was ecstatic when I learned I had been accepted to be an Elections Official for Early Elections at the Laurel Hills Community Center precinct, and I began my onboarding process and subsequent training for the job in mid-July. I was thrilled for the opportunity to make a real difference in stopping voter suppression and ensuring that everyone’s voice was heard given the state of our country.

The Early Voting period, which at one time seemed impossibly far off, quickly approached, and on October 14th, I had my first team meeting. A little over 60 percent of us were first-time poll workers, and there were many 20-somethings like me. I was assigned to the morning shift which started the first day at 7:00 a.m. Any difficulty adjusting to an early morning wake-up call was quickly dissipated when I arrived to Laurel Hills on October 15th. There was already a line around the building at 7:00 a.m., and the pure excitement from the voters was like taking a shot of adrenaline.

On the first day, I was assigned to help manage the line, which requires enforcing social-distancing measures and offering everyone in line a face mask. Because we cannot infringe on anyone’s right to vote, we had to allow everyone to enter the voting precinct even if they refused a face mask. Thankfully, there were very few people who outright refused. Even so, with my KN95 face mask and general PPE provided by the Board of Elections, I felt like my health and safety were a priority.

Slowly but surely, I began to get into the routine of waking up at 6:15 a.m., getting to work, and being social. After seven months with very few interactions outside of my immediate family, I relished the conversations I had with my coworkers and getting to meet –even just see– new people every day. A few days in, I was placed outside on Curbside Voting where I got to help voters who, due to physical disability or age, could not enter the voting precinct on their own. Helping a voter throughout the entire process from signing the Curbside Voting affidavit to handing them their “I Voted!” sticker was extremely gratifying. Not to mention, I met a few lovely ladies on Curbside who I continue to keep in touch with and hope to know for many years to come.

This is not to say that being an Elections Official was always a joyful experience. There were many frustrating moments where voters challenged my legitimacy or their trust in me. Some didn’t believe I would actually deliver their ballot to the tabulator machine, and despite the obvious partisan tactics being employed that would make these voters cry ‘voter fraud,’ I had to maintain my composure. I simply reminded myself of my sworn oath to do my job as a nonpartisan Elections Official, plus my commitment to the democratic process and my unwavering belief that every vote is sacred.

Then there were moments that made it all worth it. We had a van of people who were staying at a shelter sponsored by Triangle Family Services come to our precinct, and many of them were provided with a current address needed in order to vote for the first time in decades. Triangle Family Services spent months organizing this trip to the polls and motivating everyone with donuts and a shuttle service the morning of. Being able to help dozens of people who have experienced homelessness in Wake County vote made me very emotional and proud of the job I was doing. If anyone needs an example of why photo ID should not be required in order to vote, this is why.

Working to help everyone access the polls and practice their right to vote was a rewarding experience on many levels. I felt like a part of my community in Raleigh, where I’ve lived on and off for the past 15 years, for the first time in a very long time. I also met people from all walks of life who I probably would never have encountered in my daily life, even before the pandemic. Shout out to Susan, UNC Class of 1976, who told me a great story about pitchers of beer for $1 her freshman year at He’s Not Here. I got to watch the sunrise every morning over the community center and even made my first TikTok with my friends.

Laurel Hills precinct helped 21,410 voters in 17 days. We registered hundreds of first-time voters, including nearly 80 on the last day of Early Voting. For every first-time voter, we clapped and cheered. Despite the assumed outcome of the federal elections for N.C., I feel like I did my part in helping my community. There were so many other races on the ballot this election cycle that will have an impact on our everyday lives as North Carolinians. One of those races is U.S. Representative-elect Deborah Ross who even came and campaigned at Laurel Hills one day. My friends Gabriela, Sara and Sawyer and I made a pact that we would keep working the elections every year and one day, in 2060, we could tell our grandkids that we helped elect Joe Biden in 2020. 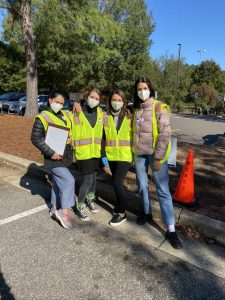